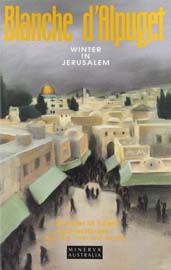 
Danielle Green's reasons for returning to the city of her birth, Jerusalem, during the first Lebanon War are twofold: first, she is researching a screenplay that she hopes will make her rich; second, she is seeking a reunion with an autocratic Jewish father who has refused to acknowledge her existence for most of her life. After a separation of many years and many miles, she hopes he will be willing to reconcile with her.
In the quest for her past, Danielle is reunited with a former teacher, an old woman of deep wisdom. She falls in love with an Israeli and is drawn into a web of terrorists and nationalists, soldiers and survivors. Yet the confusion, divisiveness and famed aggression of Israel is only the best-known part of an oft-repeated story. The country's progress, hindered as it is by centuries of religious, emotional and political turmoil, provides the backdrop to Danielle's personal journey of growth and self-respect.

Comments:
'An extraordinary evocation of a city, and a woman...the novel haunts the memory long after the book has been closed.'
-Fay Weldon

'This brilliant story of a young woman's odyssey in the tormented and self-doubting Israel of the present is...full of fascinating incidents, deftly related. It should increate further the audience of this fine Australian writer.'
-Thomas Keneally

I first visited Israel in 1980 while doing research for my biography on Bob Hawke. I was immediately smitten with a complex of emotions and decided to return to gather material for a novel. The country I came back to 3 years later was very different from the optimistic, swaggering, unified and confident one I had left: the first Lebanese war had begun and Israeli society was riven with dispute about its morality. The first wisps of feeling were creeping over the land that the dream of being 'a light unto the nations' was fading in the harsh morning of endless struggle. I spent time watching local Palestinian children and saw their eyes were dead. They had no hope. My heart fell, both for them and for Israelis because I believed this hopelessness spelled worse things to come. I had studied the Bible on and off for years, and instensively before returning to live in Jerusalem. A verse from Genesis began to haunt me: "And Jacob was left alone, and there was a man who struggled with him until the breaking of the day." Of course, the "man" is an angel, who gives Jacob his name, Israel, meaning 'he who struggles with God'. And 'the breaking of the day' means until enlightenment fills the soul. I began to believe the verse could have yet another meaning: Jacob's struggle cannot resolve until the Israelis and the Palestinians recognise in each others' faces the image of God, in which all humans are made. In other words, Israel is not yet Israel. It is still Jacob. I ended up writing about yearning, confusion, struggle---and terrorism.