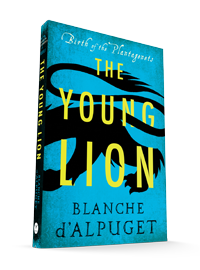 
The first book in the Birth of The Plantagenets series is sumptuous, rich historical fiction for fans of Wolf Hall and Game of Thrones.
Queen Eleanor of France, said to be the most beautiful woman in Europe, has not been able to give birth to an heir. A strategic liaison with Geoffrey the Handsome, the virile and charming Duke of Normandy, could remedy that - or lead to her downfall and Geoffrey's death.
What begins with cool calculation becomes a passionate affair. Despite his love for Eleanor, Geoffrey has larger plans: to help his warrior son, Henry, seize the English throne.
When Henry saves his father from discovery and execution by the French, he falls foul of Eleanor - and madly in love with her Byzantine maid. Should he bcome King of England, however, this dazzling woman will never be acceptable as his queen.
These intertwined relationships - heated, forbidden and perilous - are the heart of a vivid story of ambition, vengeance and political intrigue set in the glorious flowering of troubadour culture, mysticism and learning that was twelfth-century France.
Comments:


‘Blanche d’Alpuget … has a remarkable ear for the passions and cravings of her characters. Her narrative is so fresh and energetic you will swear she’s bringing us a first-hand account. This is a writer who has returned to fiction with a boldness and vigour that mirrors the Young Lion himself …’

‘What equips a contemporary writer to inhabit the women of mediaeval Europe, like Eleanor of Aquitaine or the incomparably loyal Xena? Only imagination of the most acute kind, which also explains the even ear for dialogue on display in this work, in big and small characters alike. This is exuberant story-telling history, full of sex, passion and politics.’

'The young lion of Blanche d'Alpuget's vibrant, playful and ably researched novel becomes, by its end, Henry II of England. The original, fabled lion was his grandfather, Henry I, who notoriously died after eating ''a surfeit of lampreys''. Or was poisoned by them: d'Alpuget happily intervenes in the tales that have come down to us of the foundation of the Plantagenet dynasty ...

D'Alpuget convincingly evokes the menace, death and cruelty of this 12th-century world. Henry strides brazenly across it, confident in his own sexual and military power. We read of the birth of a dynasty, and its terrible costs.

Four decades ago, Thomas Keneally wrote of the same English and French battlegrounds in his brilliant, now little-known Blood Red, Sister Rose. His task - and d'Alpuget's - required a mixture of flamboyance and fearlessness that each abundantly possesses. They are the qualities of Henry II as well, the travails of whose long reign are prefigured here. Watch for the reappearance of Thomas A'Beckett (''a flatterer and more guileful than Delilah'') in later instalments of d'Alpuget's Plantagenet series. In the meantime, buy The Young Lion in time for Christmas. That season is celebrated in the novel in a fashion that became legendary. Always up for the dare, d'Alpuget lets those four-and-twenty blackbirds out of the pie.'

'The film The Lion In Winter has long been one of my favourite and it firmly placed Eleanor of Aquitaine at the head of my list of feisty females in history. When The Young Lion, about the same Henry, arrived for review, I plunged into it almost at once. I'm glad I did. Blanche d'Alpuget has had great fun in writing this novel, the first of a promised series about the House of Plantagenet, "the mightiest royal dynasty in English history ".
Her "young lion ", who becomes Henry 11 of England is a swashbuckling figure, strong beyond his years, sexually active and a born warrior. He strides across the pages in the wake of his charismatic father, Geoffrey, and through him meets his lover, Eleanor, who in subsequent novels will become Henry's tempestuous queen.

Eleanor is deemed to be the most beautiful woman in Europe in these years, she is almost extremely wealthy, powerful and dangerous. Historically the birth of the Plantagenet reign is one of intrigue, ambition, vengeance, and danger, and the author takes full advantage of all these characteristics, giving the enthralled reader an historical novel to charm and delight the senses. With such a canvas upon which to paint, The Young Lion is a picture worth viewing.'

'As the late and great Joseph Campbell spent a lifetime maintaining, the hero's journey is the best sort of story to tell. The tale of the makng of a king---or a queen---is an even more compelling take on the hero's journey because the stakes are so much higher. This novel is not some mere concoction. Henry Plantagent was a living, breathing hero, founder of the Plantagent dynasty and one of England's greatest kings. We can thank him for, among other things, establishig English law. What d'Alpuget the novelist does is put the story back into the history.'  - John Lonie.

I've had so much fun writing this novel, first of a series on Henry II, I almost have to pinch myself. I jump out of bed each morning dying to get to work, and go to sleep thinking of Henry, Eleanor and the rest of the cavalcade. I live with them night and day. The rest of the world seems pallid, limp and nauseatingly politically correct. In this novel and its successor there are plenty of sexual goings on. Some readers have asked me "Weren't they frightened of catching venereal diseases?" I have had to tell them that there were none at this time. The 'clap' as it was called, did not appear in northern Europe for another 150 years. Syphilis came from America, an unknown country in the 12th C. Sex was the major pastime and relaxation for people of all classes: there was nothing much else to do when the sun went down. I'll never forget living on the island of Java at a time when few villages had electricity (on Bali it existed only in Denpasar). The birthrate was enormous. Electricity and television came almost simultaneously and within 9 months the birthrate was falling. It continued to fall. In our highly sexualised western culture couples are having less and less sex. There's TV, the internet and a gazillion other distractions. The sexuality in these novels is as much a part of the fabric of 12th C life as was feudalism and warfare.

The Young Lion is now available in small-format paperback in book shops. It is being translated into Mandarin and has been published in China.