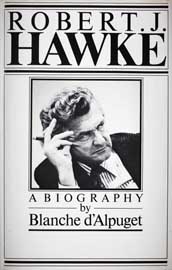 
'Robert James Lee Hawke is one of the great men of Australian public life. A Rhodes scholar, he rejected an academic career to commit himself to the trade union movement. Son of devout Christian parents, he had been reared to public duty and to the ambition of political leadership.

Hawke first came to prominence as a union wages advocate, and as President of the ACTU from 1970 to 1980 he was a master negotiator and peacemaker in industrial life. He agitated for social and economic reforms, becoming a folk hero and the most popular Australian of his time.

He led the Labor Party to victory in the general election of March 1983 and, in winning three successive elections, became Australia's longest-serving Labor Prime Minister.'

'I admire the author's skill in painting the most elusive of portraits - a living politician. One doesn't need to agree with every page to relish the book's sweep and vivacity.'
-Geoffrey Blainey

'A fascinating book. It contains some inside stories that are eye openers, even for someone who has been watching the Labor Party at close quarters for years. It is likely to be an essential key to understanding Australian politics for quite a while.'
-Laurie Oakes

'I could not put it down. Blanche d'Alpuget's book is not only a brilliant warts and all study of a complex, gifted man. It is also an impressive and in some instances a highly revelatory account of the innumerable industrial and political happenings in which Hawke was inextricably involved.'
-Alan Reid

'Blanche d'Alpuget take as her starting point the extraordinary fascination of the Australian population with Bob Hawke and uses all of the craft of the novelist to probe the personality of this contemporary folk-hero. The result is a magnificently readable account of how Hawke has come to believe he is destined to be Prime Minister.'
-Anne Summers

I had hoped that either Melbourne University Press or Penguin would publish this book, but when I suggested it to them both knocked it back. My literary agent, Rose Creswell, suggested Morry Schwartz, a young Melbournian who had started an avant-garde house called Outback Press. It had died. A few writers hated him, because they said he'd not paid them. By 1979 he was back on his feet financially. Rose and I flew to Melbourne to meet him. For reasons I've now forgotten our interview took place in a street. Morry, who was around thirty and drop-dead good looking, conducted the interview leaning against a low, fast, navy blue coloured car that he owned, or hired, or had borrowed. One was never quite sure. He rested an elbow on the car roof and from time to time turned his Hollywood profile to snatch another black grape from the bunch he held by its stem between thumb and first finger. He was willing to give me the big advance I needed to do the travel necessary for research. When I told other writers and senior journalists who my publisher would be, to a man and woman they assured me I was nuts, that I would never be paid, that Morry was this, that and the other. The kindest thing said about him was that he was 'a cowboy'. He lived a bohemian life, eating all his meals in restaurants, sharing a house with a couple of artist friends and before that with his beautiful paramour, Margaret Gee. (Margaret would later become my literary agent.) As a writer, I could not have been blessed with with a more accommodating publisher. We chose the cover together, sitting on the floor of his office in Melbourne with scores of photographs, trying to choose the most evocative. Morry had a much more developed visual sense than other publishers I'd met (he had originally planned to become an architect.) It was his idea to make the cover black and white, because the eye is naturally drawn to white, so the book would stand out from others on the shelf. The picture we chose was not flattering to my subject: Hawke was smoking a cigar and to anyone who knew him well, obviously was half-drunk. It was a tough but honest profile. Morry persuaded the most prestigious book shop in Melbourne, Hill of Content, to fill its entire window with nothing but the Hawke biography. Such moments writers can only dream of. I never asked, but always believed, that the reason Schwartz was willing to back the Hawke biography was two-fold: first, he was a businessman, and sensed the book could become a best-seller if Hawke's career flourished. Second, as a Jew, he deeply appreciately Hawke's support for Israel at a time when doing so was literally dangerous and potentially disastrous for Hawke's career. Of these two, I think the second reason was paramount. The book became a best seller. I got paid---not always on time but, I believe, in full.