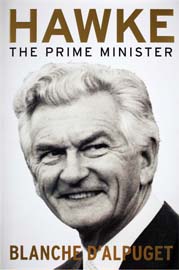 
'Based on exhaustive research and interviews, this record is a meticulous portrait of wily and brilliant Australian politician, Bob Hawke. Candid and detailed, this account underscores Hawke’s achievements, such as his victory over Labor leader Bill Hayden, his appointment as Prime Minister, and his involvement in the precarious game of international politics in the last days the Cold War. Rich with intrigue and drama, this reference also includes an in-depth analysis of how power is deployed and how elections are won in Australia.'
I wrote this book at the request of Louise Adler of Melbourne University Press, hoping to have it finished in time for Bob's 80th birthday. But publishing is a slow business and although I had the manuscript finished, the book didn't come out until the following July. The launch was dramatic and slightly embarrassing: the Prime Ministr, Kevin Rudd, had agreed to launch it. In June, while Bob, my son Louis and I were on holiday in France, eating lunch in a very smart restaurant in Beaujolais, under a huge tree, my mobile began to ring. And ring. And ring. The polite upper class French looked scandalised that lunch was being interrupted. But I, then Bob, had to take the calls: they were from politicians warning that the prime minister was about to be challenged by Julia Gillard, and it looked as if she had the numbers. It was the middle of the night in Canberra and the result would not be known for a few more hours. Bob walked as far as he could from the lunch tables, over towards a fence, but because we were deep in the countryside, reception was poor and he kept shouting, "What? Who!" drawing disapproving glances not only from other diners, but from the waiters. At MUP Louise was presented with the exquisitely embarrassing problem of telling Kevin Rudd that he was no longer required to launch the book. The new Prime Minister, Julia Gillard, did so, and magnificently.
My major aim in writing was to capture the memories of public servants, prime ministerial staff members and other ministers who had not written their own books before their memories faded, or they died. I believe I managed this, and have thereby preserved something for Australian historians that otherwise would have been lost. Public servants and former staffers talked to me freely, in a way they perhaps would not have done had they been less confident that I knew the subject well. Of course, a full account of Bob's time as Prime Minister cannot be written until the cabinet papers are released---but even then, delicate matters were written on yellow stickers that could be, and often were, later destroyed. Writing history is a frustrating business, trying to capture butterflies with a net that has holes in it.
The book conflicted with Paul Keating's view of his own importance in the Hawke government. When it was published in 2010 Keating announced in an angry letter to The Australian newspaper that he would write his autobriogarphy to set the record straight. He did not. Instead he approached Kerry O'Brien of ABC television to conduct a series of interviews. The resulting four one-hour programs, broadcast in late 2013, made fascintating entertainment. They were informative, intelligent, insightful and often fanciful, with assertions such as "I beat Howard in 87". (Hawke was Prime Minister at the time.) There were many other revealing instances that demonstrated Keating's own self-assessment: that he was 'a maddie'.
Purchase online, via Booktopia.
© 2019 Blanche d'Alpuget. Title photo credit: Simon Bernhardt.