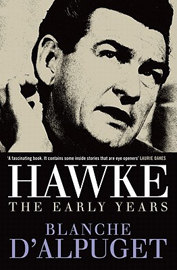 
"Known throughout his life as a tireless campaigner for workers' rights and a man of wild personal habits, Hawke was a Rhodes Scholar, educated in three universities, before rejecting an academic career to commit himself to the trade union movement.

As President of the ACTU from 1970 to 1980 he was a master negotiator and peacemaker in industrial life. He agitated for social and economic reforms, becoming a folk hero and the most popular Australian of his time.

While he was President of the Australian Labor Party he sought to heal its wounds after the sacking of the Whitlam government; as the leader of Australia's unions he held back potentially violent industrial action over this most divisive issue.

To unionists he was a giant killer; to some employers, a crypto-Communist bent upon their destruction. Hawke: The Early Years is an intimate portrait of a man of extraordinary achievements who struggles to overcome his drinking and philandering in order to rise to the highest office in Australia."

This is the reprinted version of Robert J. Hawke, a Biography, first published in October 1982. When I wrote an update in 1984 to include Hawke's years as Prime Minister, the publisher, Louise Adler of MUP, and I were faced with a dilemma: the book would be the size of a brick. We decided, therefore, to publish it in two parts, Hawke the Early Years (the original biography, re-titled) and Hawke, The Prime Minister. I hope the inconvenience of having two books is outweighed by their manageablitity.